Space Ghost, also known as Tad Ghostal or Thaddeus Bach or Kyr (Depending on who you ask) is the titular character and protagonist of the Space Ghost franchise, appearing in every iteration. Once a superhero, he later became the talk-show host he's best known as, though he's still no stranger to fighting crime. While often brave and resourceful, Space Ghost is just as often oblivious and egotistical. Don't trust him too much, is all we're saying.

Space Ghost's costume generally remains the same through each adaption; a white bodysuit with a wispy yellow cape, black mask connecting to his red and black emblem, power bands, and a power belt. Like many superheroes of the era, he has no visible pupils. Why? Don't know, ghost powers or something. Ask him about it.

His appearance under the mask varies. While there was concept art by Alex Toth of him under the mask for the original series, it was never used there. Coast to Coast solved this dilemma by just having him never take off the mask, ever. The 2005 Miniseries, however, shows him looking similar to the concept art before he became Space Ghost, albeit more muscular and with a slightly different hairstyle. Future Quest uses a design much like the 2005 miniseries, though with glowing hair and eyes, making him seem more ghostly. His real name in Future Quest is Kyr.

Because of how much adaptations can vary, Space Ghost's personality largely depends on the type of series he's appearing in.

In appearances more adjacent to the original Space Ghost series, Space Ghost himself is a model superhero. Though often aloof, Space Ghost will do anything to protect the ones he loves. A caring and courageous individual, Space Ghost is known across the universe for his many crime-fighting feats. He is incredibly committed to serving justice, no matter what he has to do. Even in the original Hanna-Barbera series, many episodes end with him not sure if his most recent foe has even survived their last encounter or not.

When appearing in media closer to Space Ghost Coast to Coast, however, he's a different beast entirely. This iteration of Space Ghost, is, of course, a talk show host, but it's up to you to decide if he's good at it. Many guest appearances result in him becoming infatuated with them, getting into fights with them, or just plain ignoring them. His personality, in general, is pretty much the opposite of how he was originally. He only really cares about himself, forces Zorak and Moltar (Or Brak in Cartoon Planet) into the show with him without pay, and is completely oblivious to what's going on half the time, often spouting nonsensical phrases. He insists that he's a real ghost, but isn't really sure how ghosts work.

Space Ghost has made three appearances in The Brak Show.

Space Ghost, from the cover of the comic book miniseries. 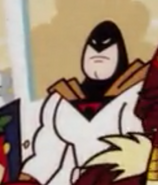 Space Ghost in The Powerpuff Girls. 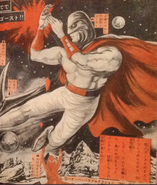