Moltar is one of the main antagonists of the Space Ghost franchise.

In early appearances, Moltar wore a yellow and white outfit with white gloves. He eventually switched to his more well-known red and gray outfit with green gloves.

He was one of the greatest villains of Space Ghost and member of the Council of Doom. In his first appearance, the character was called Moltor and had a different appearance. The name Moltor was later used as the name of his home planet in Space Ghost Coast to Coast. He was portrayed by the late Ted Cassidy on the 1960s series.

He later became the director on Space Ghost's talk show, Space Ghost Coast to Coast. He was the nicest one of the trio but was willing to do messed-up stuff such as killing his roommate.

Moltar was also briefly the host of Toonami, before he handed the role over to his friend TOM. He's the only one of the trio to have a family as he has a wife named Linda and children. He was portrayed by the late C. Martin Croker in Space Ghost Coast to Coast, who also played Zorak.

Moltar in The Ovens of Moltor. 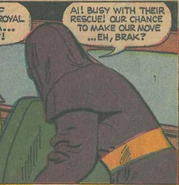 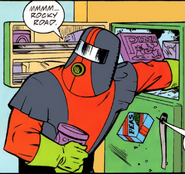 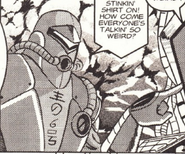