Edit
watch 01:36
We're Getting Mutants in the MCU - The Loop
Do you like this video?
Play Sound

Birdman (Ray Randall) is an ordinary human imbued with superpowers by the sun god Ra. His wings allow him to fly. He was voiced by Keith Andes. Birdman appeared on two episodes of Space Ghost Coast to Coast as a substitute host, voiced by Scott Finnell. He later got his own spinoff show called Harvey Birdman, Attorney at Law.

Ray Randall was an archeologist who one day stumbled across the tomb of the sun god Ra. Upon opening it, he was contacted by the deity himself and told since he found his tomb, he was chosen to shine the light of justice onto the world. Ray received bird wings and a variety of light-based powers, and he emerged onto the crime-fighting scene as the hero Birdman. Also around this time, he was accepted into Inter-Nation Security as a secret agent, where he met his mentor Falcon 7.

Sometime later, Birdman changed his real name to Harvey Birdman and tried to become a talk show host. A set for Birdman was being built next to Space Ghost's set. (Space Ghost Coast to Coast: Fire Drill)

He appeared on Space Ghost's monitor one night, complaining that the Cartoon Network laid him off and "clipped his wings." He unsuccessfully tried to get money from Tad. (Space Ghost Coast to Coast: Art Show).

Birdman was waiting in the wings of Space Ghost's studio during a rehearsal, where he hoped to be the host again. (Space Ghost Coast to Coast: Rehearsal).

Shortly afterwards, a look at the "pilot episode" for what eventually became Space Ghost's show was presented. Birdman was the host; unfortunately, he was very inept at it and ended up being fired, to be replaced by Space Ghost. Lokar says Birdman is now a propane salesman in Indiana and if Avenger sends you, he'll give you a propane tank for free. (Space Ghost Coast to Coast: Pilot).

Birdman later returned to the show when Space Ghost was in prison for abusing his staff. He interviewed Captain and Tenille, and also engaged in a conversation with his ex-wife, Gravity Girl, who was now dating Falcon 7. Space Ghost escaped from prison, found Birdman, much to the hero's confusion, and called him a six-piece Chicken McNobody. They started fighting, but they eventually made up and became friends. (Space Ghost Coast to Coast: Sequel).

He has made two appearances in the Space Ghost Coast to Coast comics. 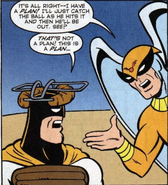